The Campaign calendar reflects all ongoing activity on a given show. All dates are bookable and the calendar simply highlights days where there are existing bookings. If you hover over dates where there are booked or proposed campaigns, the campaign details will appear in box as can be seen in the top screenshot. The selected dates are displayed in blue.

Note: Any sponsorship campaigns booked by Acast will have a (By Acast) in the name


B. Estimated cost to Acast: The estimated campaign cost is calculated by multiplying the Network’s contracted CPM with Acast and the estimated impression goal. This represents the cost of service charged by Acast, to the Network.


C. Estimated cost for advertiser: The estimated media plan cost is either calculated by multiplying the CPM entered in the “CPM with client”-field with the estimated impression goal OR whatever fixed fee if the user picks that option. It represents what the publisher may charge the client, provided that the impression goal is met.


D. Campaign clash information: When you have one or more booked campaigns targeting the same period, the following warning will appear: 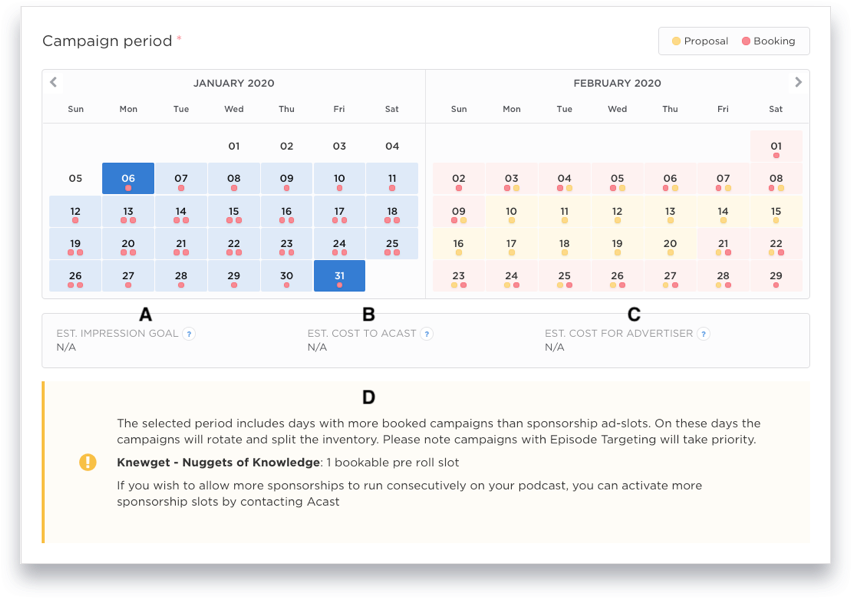