All the steps to get your campaign set up and booked

In the dashboard view’s top right corner there’s a big blue button that says “+ NEW CAMPAIGN”. This button will take a user directly to the campaign editing view in which all campaign details and components are entered. 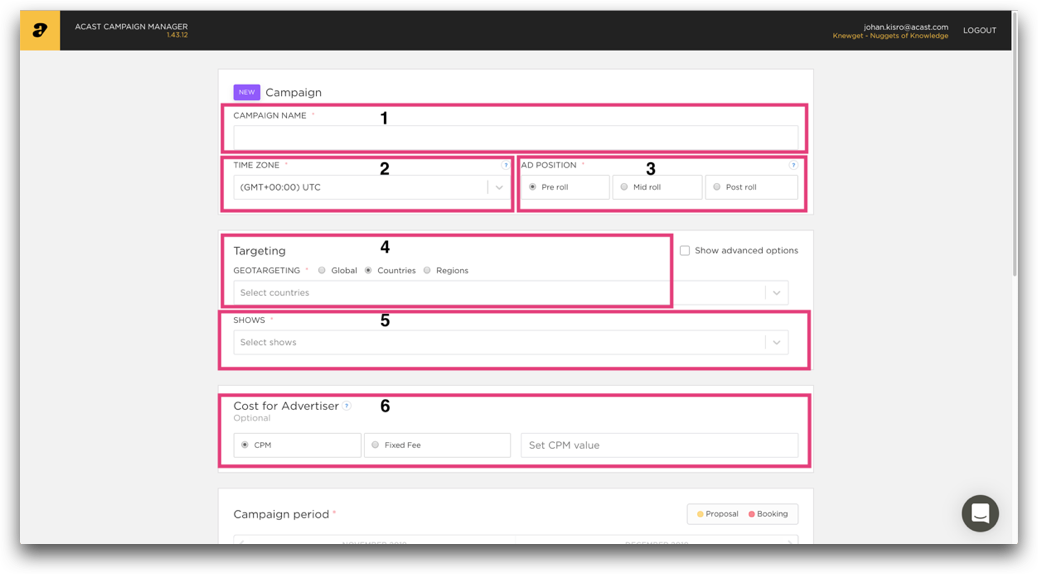 1. Campaign Name: Enter the name of the campaign


2. Time Zone: Select the time zone you wish the campaign should targeted against.


3. Ad position: Select which ad position that the campaign should deliver to; pre-, mid- or post-roll. Only one position can be targeted per campaign.


4. Geo-targeting: Select your geo-targeting by your preferred level. One or multiple countries / regions can be targeted. If you wish to targeted the campaign against Global listens, just check the box.

5. Select show: Select the show you would like to target from your Network. One or multiple shows can be targeted.

6. Cost for Advertiser: In this field a user may enter either a CPM or a Fixed price that is being booked or pitched to the client. By filling out this field, the calculation for “Estimated media plan cost” will be performed and surfaced under the campaign period calendar. This is the cost that a user would be able to charge the customer, provided that the “Estimated impression goal” (also surfaced under the campaign period calendar) is reached. 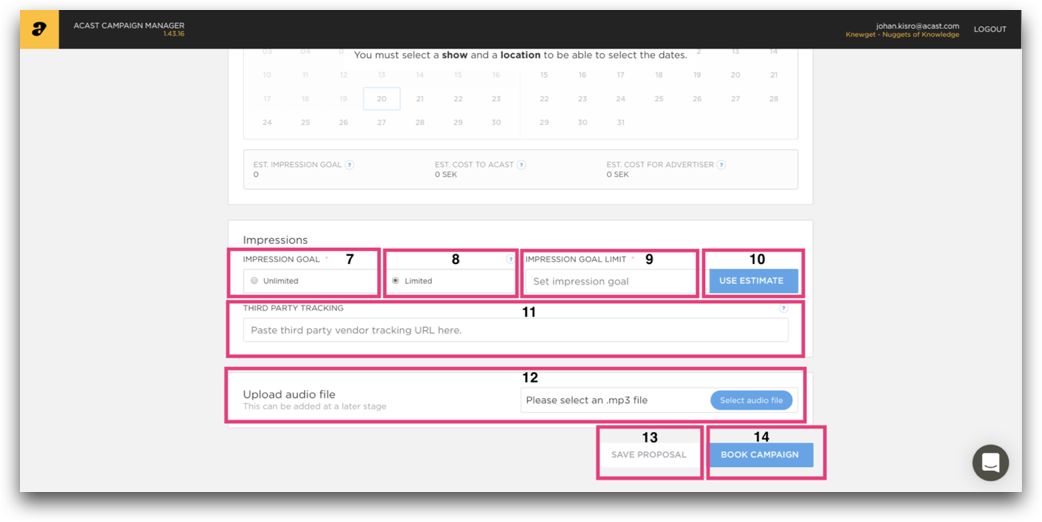 7. Unlimited Impression Goal: Will enable an unlimited impression goal for the campaign, and the campaign will deliver on all listens until the end date has been reached.


8 & 9. Limited & Impression Goal Limit: If you want to select your own impression goal, you just tick ‘Limited’ (8) and then enter your desired impression goal in the box (9).

12. Upload audio file: This function allows a user to upload the sponsorship audio file directly. The file format needs to be an mp3-file. Campaigns may be saved as proposals or booked, without uploading an audio file. But in order to start serving impressions, the audio file needs to be uploaded.

13. Save proposal: Save the campaign as a proposal. By saving a campaign to this state, the assigned campaign dates are still available to be booked by other campaigns.

14. Book campaign: Save the campaign as “booked”. By saving a campaign to this state, the assigned campaign dates will be blocked and can’t be booked by other campaigns.